The game you are hunting is of most important consideration. Match the bullet to the game and the velocity you expect. For revolvers we can add a cannelure to factory spec or your own custom location, just ask for this service.

Be sure to visit our Hunting with Handguns page for more information on what to look for in a handgun bullet.

Please note: A lower case "c" appearing after the price indicates it is a custom order. The number after the "c" indicates the minimum number of boxes required to order.

HAWK PRECISION BULLETS FOR HANDGUNS
— ALL PRICES PER BOX OF 50 —

All the Hawk bullets for the Wildey have an “auto nose design” that allows jamb free cycling through the action. Normal .475 caliber bullets of acceptable weight are designed to be used in revolvers and the frontal area is problematic in a pistol. Both companies were involved in the development of the profile Hawk uses for these bullets. They feed and perform well on game without plugging your gas ports with lead. Over the years many customers have given us great feedback on the .475 Wildey bullets.

We have more information about the Wildey Pistol on our Resources page.

"(Hawk’s) 350 grain flat nose bullet, which (because of its short ogive) is only a fraction of an inch longer than the Speer 325 hollow point, cut a .25-inch group at 25 yards with several loads. This is the bullet I would use on elk size game and up."
— John Kronfeld
".50 AE Desert Eagle"
Shooting & Hunting Buyer’s Guide

Since doing the prototype, jacketed bullet development for the 500 S&W when it was first introduced, Hawk has always offered a good selection of premium hunting bullets. 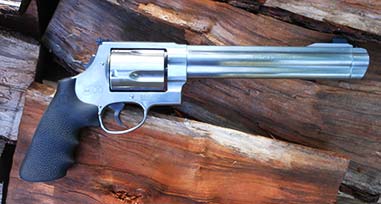